“Tight places are good for you”

– discussing ideas of N.N. Taleb’s book “Antifragile” in the light of improvisation principles.

The article is here, but read further below if you are interested to know how on earth I came to connect this book (which is based around Taleb’s expertise as an economist) to the practice of improvisation performance.

A week ago in my favourite bookshop, I found Nassim Nicholas Taleb’s book “Antifragile – Things that gain from disorder“.

Now, well into the first 100 pages, I decided to begin writing about it on this blog to discuss some implications that his ideas have for the discipline of Instant Composition performance and the art of Improvisation.

Taleb is interested in complex, multi-layered, self-organizing systems and the question how one can best survive (and even flourish) in such volatile environments.

Anyone who ever stood on stage in the context of an improvisation ensemble, be it music, dance, theatre or mixed disciplines will understand directly why his ideas must in some essential ways be relevant to improvisers.

As improvisation is a very ‘visceral’ craft, dealing with reality, perception, relationships and limitations of roles and ‘instruments’ in an unpredictable environment, I can also imagine that people from other (non-art) disciplines who deal with complexity might be interested in these thoughts.

This first post is simply to give an idea of what the book is about, and why I make the connection with improvisation. 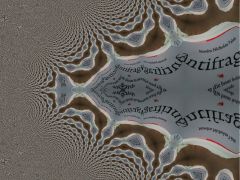 Picking up the book, one needs a bit of time to get used to the new word that Taleb introduces to us: “Antifragility”. But once one does, it proves to be a pretty neat term to explain a lot of things, in a lot of area’s. In short, Taleb says that, although we see the phenomenon all around us and it is not something new, we do not have a word yet for the opposite of ‘fragile’. When we define fragile as ‘describing something that does not like unpredictable events, disorder or rough handling (like for example a cupboard of fine porcelain cups) then the very opposite of this term is not ‘robust’, because something that is robust is merely neutral towards rough handling. If a cup doesn’t break when I throw it on the ground, it just means that it is pretty unimpressed by any kind of handling, be it careful or rough. The opposite of fragile must therefore be ‘describing something that gets better from unpredictable events, disorder or rough handling’. Something that actually gains from being thrown around a lot should therefore be called ‘antifragile’.
While fragile things/systems/organisms like stability, antifragile things do not like stable environments (and will deteriorate when being in an unchanging environment for too long.)

Some examples of antifragile things:
– The human body is antifragile. If you will remain sitting behind your computer screen for another 24 hours, that will be a very stable position for your body, but everybody knows that it is not beneficial for your health. Our body gains from having to cope with lots of different stimuli, as does the human brain by the way. We get fitter+smarter when being challenged every now and again (a trait we probably share with all living organisms)
– Evolution and natural selection work so well because of both mutation (random mistakes in DNA) and sudden changes in the environment. A missing chromosome or a sudden ice-age is bad for the individual organisms, but in the long run, evolution creates better and ever more complex & adaptive organisms not just because it is ‘robust’ (it doesn’t mind an ice-age), but because mistakes and disorder make the output of the system better. So evolution, as a system, is also antifragile. (interesting news for the Genetic Choir 😉 )

Taleb is quick to add that of course most antifragile things only like disorder to a certain degree (having to run away fast due to an unexpected event – like a tiger attacking me – will make my body fitter if I can get away and my muscles are allowed to rest afterwards. Being caught and eaten by the tiger will not make my body fitter.)

But other than that, any antifragile system that is stressed (being subject to an unexpected event, having to adapt to new challenges/environments) and then is given time to reorder itself in response, will actually get better and flourish in the process.

This is the central idea of Taleb’s 500 page book, and he works it out and connects it to a big number of areas, which all seem to benefit from a look at them through the prism of fragility/antifragility: Philosophy, craftsmanship, politics, innovation, financial systems, obsessive love, ethics, medicine, terrorism, architecture, science, information technology, and even more.

Why do I want to reflect on his ideas with this specific subject in mind?

For once, improvisation is by definition an unstable environment, so any performer who wants to engage in an improvisation should not only be robust to randomness and unexpected events, but thrive and bloom on it. So an interesting question could be: How can I become, in my discipline of performance, more antifragile?  (a question linked to ‘skills of an improviser‘)   While another interesting question would be how to create environments that help the quality of improvisation. Phrased in a different way we could ask: “Which kind of set-ups for performers and audiences are more antifragile than others?” (and will therefore probably be yielding better performances – a question linked to the frame/context of improvisation)

So this is the context of my reflection adventures while reading Taleb’s book that I want to share with you.

I read for example what Taleb advices for producing original, new ideas. He writes: “First of all try to get yourself into trouble. And I mean serious trouble that does not kill you.”

It reminds me of how Enrique Pardo of Pantheatre tends to side-coach his improvisation performers: “Get yourself into a tight place!”

—> Problems: Welcome! (Tight Places are good for you)

Technical note: I am reading the Dutch translation of Taleb’s book but will write these overpeinzingen in English, as most people who follow this blog are not Dutch speaking. Some quotes from the book might therefore not be in the exact wording of the original, as I am translating them back. (which could create some extra antifragile excitement – will the quotes be completely accurate or will some unintended, new meanings emerge on Taleb’s key thoughts, simply from the mistakes of double-translating 😉 )